Who changed the scientific conclusions of a paper that could have saved millions? At last, we may have a name.

This is a scandal of immense proportions that warrants an immediate investigation.

If what you are about to learn was playing out onscreen, the collective gasp of the audience at the moment of reveal would register at deafening decibels.

— Over one year ago, there were ample peer-reviewed, randomized controlled trials that provided strong evidence on ivermectin’s efficacy as a treatment for COVID in every disease phase.

— A paper considering these many studies was written by lead author Dr. Andrew Hill at the University of Liverpool for the World Health Organization’s COVID Guideline Development Group. Hill was an early and vigorous proponent for ivermectin. His paper showed that ivermectin could reduce deaths by 75% if used throughout the world.

— Inexplicably, just days before its publication, the paper appeared on a pre-print server, with its conclusions changed. Instead of concluding that Ivermectin—one of the world’s safest and most inexpensive drugs— should be rolled out globally, it now concluded that more studies on Ivermectin were needed before it could be recommended worldwide.  Given the totality of scientific evidence for Ivermectin, it was a stunning—actually shocking—reversal by Dr. Hill.

—In an urgent Zoom call to Dr. Hill initiated by Dr. Tess Lawrie, Director of the Evidence-based Medicine Consultancy, Dr. Hill admitted to her that one of his study’s sponsors, Unitaid, had a say in the conclusions of his paper. But he would not divulge the name(s) of those who altered the paper’s conclusions.

But now, “The Digger” on Substack (aka producer/director Phil Harper) has revealed the name of the person who could have edited the paper’s conclusions—which led to the WHO’s non-recommendation of the use of ivermectin. That decision could have led to the unnecessary deaths of millions across the world.

Mr. Harper studied the PDF of the paper, wanting to learn the identity of its “ghost” author. “The hope was that some artifact on the PDF would reveal something, maybe a font was different, maybe there was a hidden comment, maybe some tracked changes had been saved to the document,” said Harper. “None of those lines of inquiry came to anything.”

Then it came to him. Was it in the PDF’s metadata? “Sometimes it’s the most obvious of things,” Harper writes. “The ‘v1_stamped’ version of the paper did indeed have metadata. It even had author information inside the metadata. Expecting to see Andrew Hill listed as the author, instead, I saw a name I recognized. Andrew Owen.

“Unless someone used his computer, Andrew Owen has his digital fingerprint on the Andrew Hill paper.” 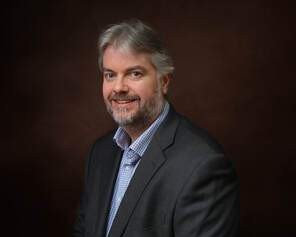 Professor Andrew Owen is the person who allegedly edited the critical Andrew Hill paper on Ivermectin. He was also in receipt of consultancy fees from pharmaceutical companies with competing products.

As it turns out, Andrew Owen is a Professor of Pharmacology & Therapeutics and co-Director of the Centre of Excellence in Long-acting Therapeutics (CELT) at the University of Liverpool. He is also scientific advisor to the WHO’s COVID-19 Guideline Development Group. Just days before Dr. Hill’s paper was to be published, a $40M grant from Unitaid, the paper’s sponsor, was given to CELT —of which Owen is the project lead. “The $40 million contract was actually a commercial agreement between Unitaid, the University of Liverpool and Tandem Nano Ltd (a start-up company that commercializes ‘Solid Lipid Nanoparticle’ delivery mechanisms)— for which Andrew Owen is a top shareholder,” says Harper. 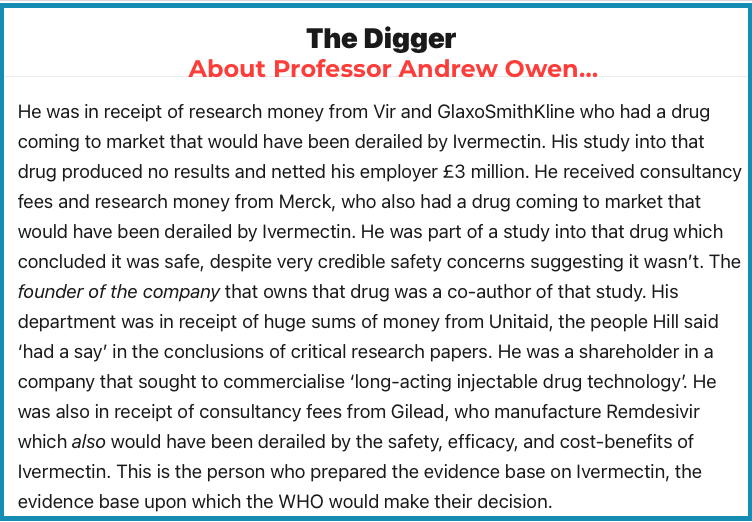 Read the entire essay HERE. In it, Harper reveals much, much more. This is just the latest in a series of postings on ‘The Digger’ exposing the machinations and the backdoor wheeling and dealing to prevent ivermectin from saving lives so that other, more profitable (and scientifically proven more dangerous) designer drugs could take center stage and make bank.